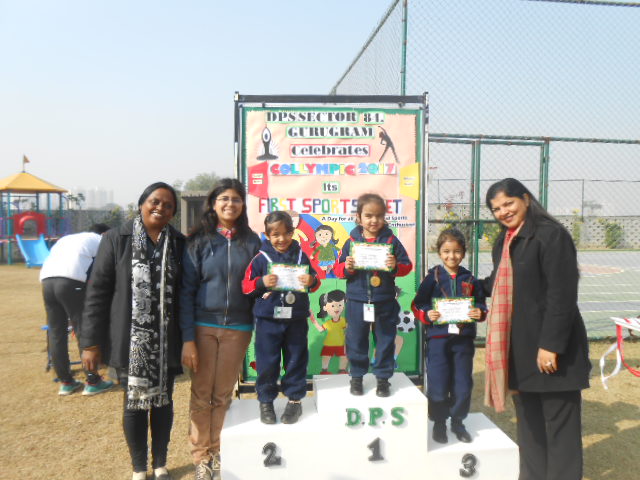 Bright clear and sunny sky accompanied by pleasant weather was the perfect boost for the students and they entered into the spirit of the occasion in a grand way. The much awaited Annual Sports Day commenced with the oath ceremony administered by our School Sports Captain. The Principal declared the Sports Meet open and appreciated the impressive March Past of the students, which was a magnificent display of discipline, coordination and the impeccable synchronization of all the four houses. An energizing exercise drill, yoga as well as aerobics presentation set the tone for the rest of the events.

Once the races began, the air was filled with cheering and tones of encouragement for the young athletes. Rabbit race, Jelly fish race, Pack your bag race, Shuttle run with ball race, Hawaiian race were some of the races conducted for the students of Nursery and K.G. Students of Grade I took part in Obstacle race. Heats for the relay races were done over a period of one week, in which the students were shortlisted for the final round. Students from Grades III to VII also participated in football, badminton and cricket matches and the final list of the players was prepared. Those shortlisted played the final matches.  Grades II to VII competed house wise in events including 100 m, 200 m, 200 m relay races, a highly competitive event where the four houses eyed for the first place, competed with great stamina and vigour, trying to gain more points for their respective houses. Fun time with three legged race by the teachers of the school, added enjoyment to the event.
The day ended with distribution of medals and certificates to winners by our honourable Principal.